After Nappi and Jaska joined "Riistetyt" they were replaced by Vesku and Poko. So the line-up in fall '83 was Jakke (shouting), Sidney (guitar), Vesku (bass), and Poko (drums). In February '84 Sidney went to army and apparently Eppu, little brother of Roitsu (ex-Bastards) is the new guitarist. The boys have been in the studio and the "Ristiinnaulittu" (Crucified) LP should be out soon. This interview is from early January. Rike from "Riistetyt" and Vilenius (Propaganda Records) were also there. 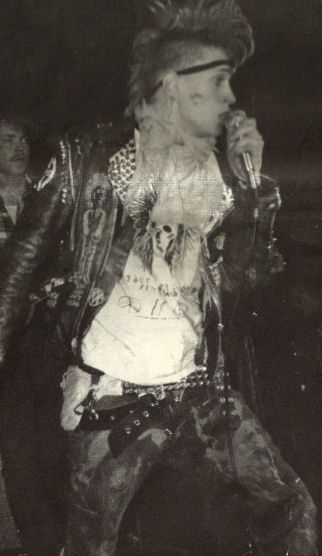 Can you say anything about the next recordings?

Jakke: We should finish that LP first.
Vilenius: Well what do you think about the LP?
Jakke: It's not even finished yet.
Vilenius: Sure it is.
Jakke: No it's not Half of it's shit No, we're gonna work on it We don't want to put out some shit LP, we have enough of those in Finland.
Rike: Why did you do it like that?
Jakke: It turned out like that.
Rike: I think it's a good LP. No more than three bad songs.

Why does Kaaos exist?

Jakke: Because when we started there weren't a lot of bands like this and seems like there aren't so many left either these days. I dunno. So hard these questions. You could put there that we're not really a punk band. We play punk. Because punk died in January '77. It lived for about two or three months. Then when all the idiots came along, I'm not talking about Finland, But England, punk never came to Finland.

Now you're just contradicting yourself.

Vilenius: Where have you been, Salminen?
Sidney: Around the town?
Vilenius: How did you end up in this band?
Sidney: Well from Bastards of course. Does Vilenius have other questions?
Jakke: You do the asking.

I'll ask the questions you couldn't answer, like the motives behind Kaaos?

Sidney: You couldn't answer that? You should know.
Jakke: Yeah but I just woke up.
Vilenius: He already answered that. There aren't any harder punk bands in Finland. Kaaos was the first and still is. The rest gave up.

So was that the answer? 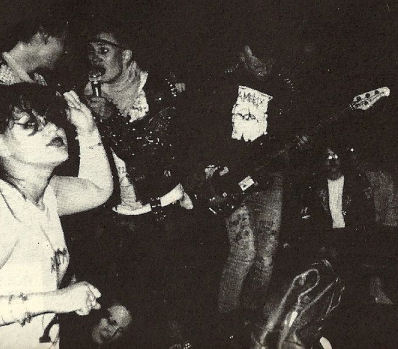 Sidney: No it wasn't.
Jakke: Yes it was.
Vilenius: The future of Kaaos. What happens after the "Crucifixion" LP?
Jakke: Salminen goes to war.
Sidney: I'm off to the battlefield.
Jakke: We stay and drink...
Sidney: Coffee.
Jakke: Maybe Kaaos will continue... This isn't exactly the best place for this interview (Rike Jokela's place).
Vilenius: Do old geezers ever talk to you?
Jakke: Drunk in a bar and so on, they come and ask what we're about.
Sidney: And then when you try to explain it they don't wanna listen.
Jakke: Or they're just so intolerant.
Vilenius: What do you think about the radio?
Jakke: Full of shit.
Sidney: Bad music but sometimes some good music.
Jakke: Rockradio is one big cunt. The people just play their own favourite music.
Sidney: Except Outi Popp's good.
Jakke: They have quite a lot of influence on things... When they play the same record every day people just go and buy it. Ask something completely different. Something no one's ever asked.

(Looking outside the window): What do think about snowfall?

Sidney: It's a bit annoying.
Jakke: Just when you get your hair up, takes hours, then you know, you go outside in the snow and it goes like this.
Sidney: Drives you nuts.
Jakke: That's what I'm pissed off about most of the time.
Sidney: I was personally affected by it. I remember when I worked as a janitor one fall, I didn't have to do anything, but then on two weekends there were so much wet snow and I quit.
Jakke: [...] We should head out to south?

How important is appearance?

Jakke: In Kaaos it's important, has always been.
Rike: If you wear something like that, it forces people to think about that stuff, that there are different opinions. But in Finland it became fashion right away, with all the shops, Nisonen [Decadence] started selling all kinds of shit.
Jakke: It basically got out of hand.
Rike: You can buy Riistetyt shirts there. Buy Riistetyt stuff and Holy Dolls stuff so I can get royalty money. And buy some Bastards stuff too.
Jakke: You see our royalties here on this, what's this, a bullet belt. I didn't mention anything to them.
Sidney: Right. Where's my royalties then. My bullet belt?
Jakke: You don't need one. You get yours from the army.