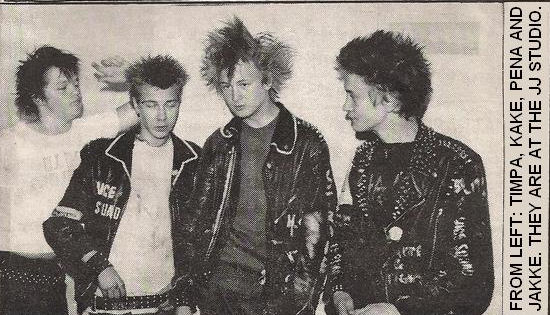 INTERVIEW FROM 1981
(by Matti Saarinen)

"Kaaos" is one of the toughest and most genuine Finnish punk combos. Their line-up is: Jakke - guitar, Kake - vocals, Pena - bass and Timpa - drums. Barney was on bass at the first gig, but then he was kicked out. They're influenced by "Exploited", "Discharge", "Infa-Riot", "Disorder", "UK Subs", "Anti-Pasti" etc. No Finnish influences really. The average age of the band members is about 16, for now. "Kaaos" went to a studio with "Cadgers" in early October, but they weren't happy with the mixing so they went back later in the same month, and their EP should be out soon. "Johanna Records" has also shown some interest, but we'll see.

What do you think about politics? 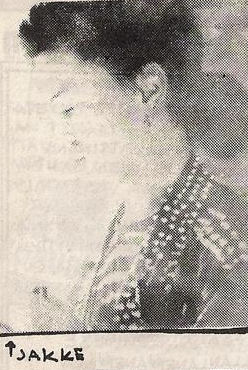 We are a political band, but we're not concerned with parties. We're against the right and the left, but we're still working class guys, poor and born to lose.

How did you come up with that name?

We have had a few gigs. They have been about 100 marks per gig, so they have covered the costs. We don't have our own equipment and the guitars are cheap and second-hand.

Where do you get the ideas for your songs?

From everyday life, from our own experiences. No silly stuff or the kind of lyrics that "Terveet Kädet" has. For example "Kaks' vihreää polkupyörää" ("Two green bicycles"). Fuck, it's a stupid song. Why would you say that there's a couple of bikes outside?

How long are you going to continue? 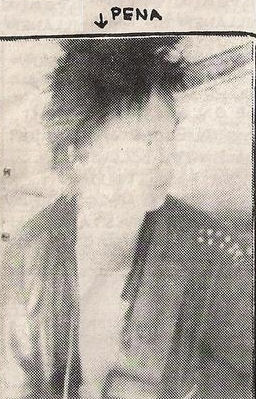 We don't have any plans about how long. We'll quit if we lose interest or if we make too much progress. It wouldn't be "Kaaos" anymore, it would be music.

What do you think about other styles, like metal for example?

Basically we don't have anything against them. A lot of people think that punk sounds boring but at least there's a message. We don't like metal, maybe some "Motörhead" sometimes. We pretty much don't listen to anything else than oi punk, not even punk 77. Our own songs include: Vapauden puolesta (For freedom), Tulevaisuus (Future), Ei enää sotia (No more wars), Sotilaat (Soldiers), Tuhlattu eläm (Wasted life), Köyhät skidit (Poor kids), Kytät on natsisikoja (Cops are nazi pigs)...