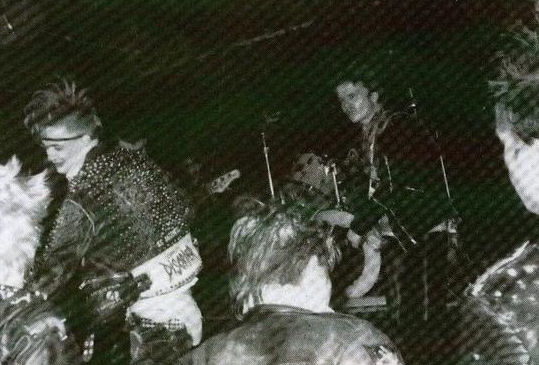 The early "Kaaos" was planning a hardcore EP with "Idiootti" already in fall -80. It never happened due to lack of money. Then in fall -81 we reserved 2 hours of studio time to make an EP or a tape. Vote ended up paying for the "Kytät on natsisikoja" EP (Split with "Cadgers"). We're not satisfied with it, nor with the songs on "Systeemi ei toimi" EP.

Then the line-up changed when we started fighting, we all got bored, we didn't have gigs or rehearsals. Pena left in the beginning of June because his parents would've kicked him out of the house and he's on probation and everything. But we're still friends.

We've got praising letters from all around the world about the "Kytät on natsisikoja" EP. About 20 from Germany, 5 from Denmark, 20 from USA, from Canada, Holland, UK, Sweden, Italy and of course mostly from Finland. 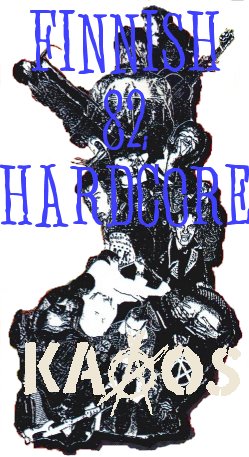 So the EP spread and now we're on about 10 foreign compilation cassettes and on an LP released in Italy. We would have had 2 gigs at the Danish "Monody" punk festival. Also the EP has sold so well at the German "Vinyl Boogie" store that it was recently the fourth most sold. They even wanted to press a couple of hundred more... Vote will do that.

Some people may think that it's idiotic to sing about cops, but as long as they keep their attitudes, we can keep singing and we didn't hold anything back. Also Tampere has the police academy with all its dedicated wankers.

The gig situation is terrible. Punk bands get no gigs. Except maybe "Lama", "Rattus" and "Kohu-63". The gigs should be outside of Tampere. Playing here makes no sense.

There should be a group of activists who would arrange gigs and punk festivals and some punk clubs. But it's impossible without enough active people. "Elmu's" were OK in the beginning, but now they're dead. In those days we got lots of gigs.

Tampere is horrible when it comes to gigs. When it happens to have one, there's always violence, lack of equipment...

Finnish punk is doing really well currently. Almost all the bands are good. The only thing is that you can hear too clearly that too many bands are worshipping "Discharge". Like "Rattus", but they're still good.

What's annoying about Finnish punk is when bands sign to bigger labels, and a year later they've already forgotten where they came from. They progress... And then there are these anarchists who fight against the system by beating up other punks. Violence is useless. Just like stardom. You're in a recording band and you think that you're big and you have a group of asskissers. But still I'm more likely to buy Finnish punk. There are exceptions of course...

About that nazi thing: UK skins are not nazis. Only a small group of skins in England are nazis. Nationat Front and British Movement is another story. And it's the same with the Finnish skins.

Now there are good punk bands in the States too. US punk is just as real and genuine as UK punk. I like them a lot. They have a completely different thing going on and they're not copying - it's original.