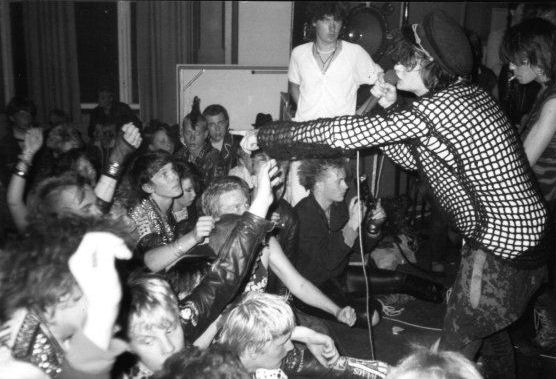 At first I was supposed to interview Jakke, the only founding member left in "Kaaos". Then I was going to meet the entire band, but because of various misfortunes I couldn't be in the right place at the right time, so we continued with Jakke. Later we met the guitarist Sidney. In fall, Nappi and Jaska joined another band and they were replaced by Vesku and Poko.

How did you end up with this line-up?

Two members joined Riistetyt. Poko is an old friend. He's always been around and I decided to ask it he could play drums. Vesku was going to Vaasa on the same train, he had a vodka bottle, then we got to know each other.

What's going on with "Kaaos" right now? Is everything balanced?

Everything's fine. It's the same. It's always been a bit uncertain. Don't know who's playing... Well, I guess it's pretty clear after all.

When are you going to release an LP called "Ristiinnaulittu"?

The tapes are done but I think there are still some things to do. We're going to make it as good as possible.

What does that mean?

It has got some synths, acoustic guitar and some piano. Three of the songs are like that. But the others are noise. There are some "Killing Joke" influences.

Tell me about the lyrics.

We all write them basically. Poko writes quite a lot and Sidney as well. I'm pretty much responsible for the songs, but the others have started making them too. Words come easier than music. I write about my experiences. Nowadays there's a lot of that "be free" stuff.

Do you believe in anarchy?

In some sense. I believe in freedom. I'm not dependent. Well kind of, but... 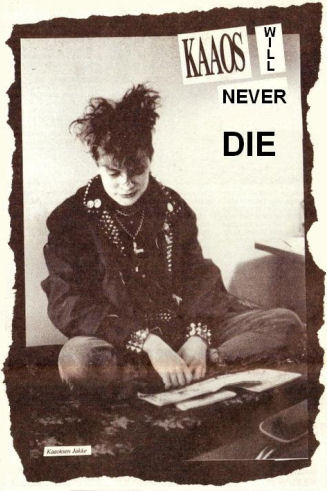 Is there a "Kaaos" philosophy or ideology?

Basically our philosophy can always be found in a plastic bag. Ha ha ha.

I was afraid of that.

That's how it is. But I don't know. Poko, our drummer is one smart bastard. I think he should be here answering these questions.

What do you think about cops?

We need them. Good cops. But those are hard to come by.

What do you believe in?

I believe in MYSELF. I believe in HER (girlfriend) and THIS (content of the plastic bag). Holy trinity.

What's important to you besides that (points to the plastic bag)?

This isn't the number one thing. It's important that I'm doing well. But it has never really been like that. I don't know if it will ever be. It would be great if could be happy all the time.

What does music mean to you?

Music means... It's my life. Fucking important. Playing and listening. That is basically what my small life is all about.

Traveling all around Finland and the rest of the world. I've only been in Sweden and Russia. Yeah, and I'm interested in girls - don't listen to this! (says to girifriendl) - and uh, fair play.

Is appearance important to you?

Pretty important. We don't have to look like punks but it's still great. And you don't have to have studs, because someone's collecting the money from all the punks. And usually these Finnish punk bitches are idiots. You can see it at Lepakko. They come to the gig, go to the restroom and empty all the bottles. They don't care who's playing. They just go on a rampage because they're so drunk. They’re just there to show their new mohawk or new hair colour. I've never met any smart ones. I guess they could play in a band if they wanted, but they won't bother to concentrate on that kind of stuff.

That was harsh. Back to Kaaos. What are these new guys like? Have they changed the band in any way?

A lot. Because everybody does all kinds of things. This is working really well. We're one of the first Finland's punk, I mean hardcore bands. We've been around almost for four years. We've made three EPs with other bands, one "Kaaos" EP, an LP and songs for a compilation LP and one italian compilation EP.

And every time you've had a different line-up?

Every time. We haven't reached that point yet where we would make two records with the same line-up. Right now we're also thinking about a record with English lyrics.

Jakke, what do you think about current punk scene in Finland?

Finland has never had anything of its own. Maybe in the early days we had something. Now there are people who copy everything from England and the States. We've never had any proper gigs or tours or anything like that. We've just made some records. We have more records than gigs.

More gigs, tours etc. so the scene would be more solid. People always think that horrible stuff goes on at our gigs and that we smash everything. It's basically like this: you have fun once a year (or 45-90 minutes) and then you sit around and wait for another year thinking: I wish "Riistetyt" would play in Enontekio. As long as "Kaaos" will continue, at least the people in Tampere won't have to worry whether punk is alive or dead. We will play punk as long as we live.