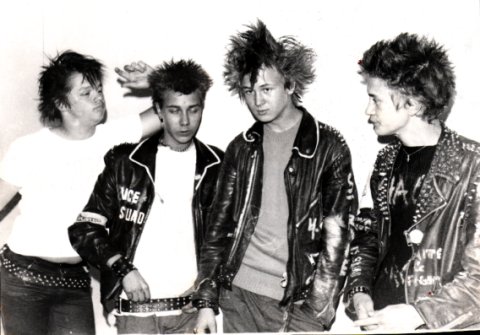 KAAOS was formed by four 14-15 year old young punks in March 1980 to play raw and noisy punk music because most of old so called punk bands had changed their styles to the new wave. At first they were mostly influenced by bands like CRASS. Then when such style as hardcore came and bands like DISCHARGE, DISORDER, CHAOS UK etc., their style changed to faster and more aggressive. KAAOS can be considered as a pioneer in hardcore in Finland and even in Scandinavia. The first record waited to be released to the end of 1981 including the legendary "Kytät On Natsisikoja". The line-ups were changing and records were released in a steady stream and the band made gigs also (KAAOS got a reputation as a "riot squad"). KAAOS was approached by some record labels to larger audience but the band kept their D.I.Y. and punk attitude. The first LP was released in 1984 ("Ristiinnaulittu Kaaos"). Before that there had been some confusions with line-ups (Jakke is the original member and former of the band) and other things. The things went to that point that the band decided to stop for so far in December 1985. After that band members played in other punk bands like KUOLLEET KUKAT, KOHU-63 and POSITIVE NEGATIVE. The new coming of KAAOS happened in 1999 in the funeral of the legendary club called Lepakko in Helsinki. From the old line-up there was Jakke and Sidney. KAAOS released couple of splits and collections and in 2001 was released 10" LP "Ismit" which brought some new ideas without forgetting the old aggro-HC. In the summer of 2002 the band made their second foreign tour which was organized by Pogo-Paul (the first was in 1984!). In April 2005 Jakke disbanned the band. Despite numerous requests to have KAAOS on stage again Jakke's decision stuck until October 2007 when KAAOS made an appearance (with original lineup!) in Tavastia Club, at the release party of the book "Parasta Lapsille". That proved to be the final KAAOS show. Jakke died a month later in November 29th 2007. He apparently died of alcohol-related causes at the age of 42.