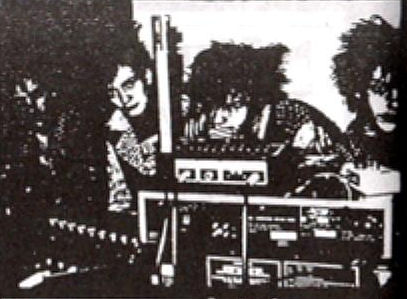 Twelve years is a long time to all the young readers out there. To me it seems long too, the last five years have flashed by so fast, and there are so many things I wish I had done instead of all the pointless hassle. Now the thirties crisis with all its spillover effects is coming ominously closer. You don't necessarily change one bit when you get older, but you can't help noticing the aging when your head's getting soft, you're frustrated, and the most peculiar thing: you start growing hair in weird places and you start losing it from the wrong place. I could moan endlessly about the joys and sorrows of growing old, but no one would care, so instead let's move on to the wonderful and tautological world of memoirs.

Two weeks before we went to the studio, me, Jakke and Hertzi were checking out the studio stuff in Pori with Mike Poison who was supposed to be the producer. I don't know who came up with that idea. Maybe Jakke had contacted him or maybe it was our financer Wilenius - that unreliable fellow with his stupid shaded glasses. Anyway Mike had connections with Laser-studio where we were supposed to make the recording.

Well, the trip to Pori turned out useful because Mike promised he would reserve the studio with the equipment and instruments. Usable instruments were needed. I think Jakke had only two strings in his guitar, and he didn't have the money to buy new ones. I gotta admit we drank a lot with locals during the Pori trip. We got one trip to jail (Jakke) and one sore nose bridge (yours truly). Hertzi survived.

Those two weeks were pretty busy, we made one more song for the EP and I ended up taking care of the financing. I spent hundreds of marks on the expenses, not a big amount for two days, and I happened to have that money on some account. I told my mum to take it out. Young boy's only money. Years later the same money is on the same account, in other words my mum had paid for the studio. I didn't realize it at the time, so I have to thank her after 12 years for helping Finnish HC. THANKS!

Wilenius had actually been hanging out in Pori on that weekend, but couldn't find the right studio - Laser-studio was in Ulvila. We would have made him pay for the whole thing. Fucking cheat, I bet he did that intentionally. I did receive a stack of records after the EP was released, but that four-eyes saved hundreds of marks. Then again, I have to say that without Wilenius and "Propaganda Records" there wouldn't be that many Finnish HC classics.

Anyway... So feeling really good about ourselves we took a train to Pori on a Friday in November 1982. There were me, Jakke, Jaska and also Late, who actually didn't have anything to do with the band, but he had tried to play some bass (I tried the guitar) and do some vocals (Jakke was playing the guitar). But the whole thing just didn't catch fire. Late did make some background noises on the EP whenever it was necessary. Jakke played guitar and sang, Jaska played drums but didn't even do any backing vocals and I blasted with bass. 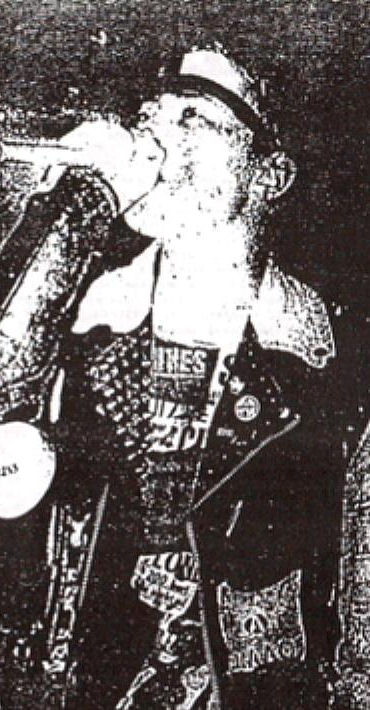 We spent the Friday night in Pori drinking heavily at some weird place with all the local counterparts. I don't remember where we spent the rest of the night, but Jakke and Late slept in Mike's car. Must have been cold... I don't envy them.

On Saturday morning Mike picked us up and we headed to Laser studio. Some guy with a mustache and chewing gum like a pro had carried our equipment into the studio. His bowl cut hair was swinging comically when he chewed. The guy was some kind of PA renter and a drummer to top it all. The thing I remember about the studio was that it was built in some cattle shed and it was quite new. You could only smoke in the kitchen which was a little box with a table, a small sofa, a draining board and a coffee maker.

It got off to a messy start when we were putting all the things together, but then we were back in business. At some point we were outside, can't remember why, although it was pouring rain. Some local crackpot and his mrs. had hitchhiked to the studio and wanted to watch us play, but the studio personnel were strictly against it, so the couple had to go back.

We recorded the basics really fast, except for the organ intro in "Uskonsota". It took time to come up with that. Eventually we sorted that out too, as Mike, who played the keyboards, had spent years in some music academy and had become a virtuoso. Jaakko a.k.a. Hendrix strummed the second guitar almost on one take.

The vocals were a different story. It was hard to keep a straight face because we did the backing vocals simultaneously with the lead vocals, and I happened to be checking out others faces when they were screaming so intensely and seriously. They were just wondering what's so funny. Then I was put on the spot when I had the honour of being the sole "backing vocalist" on "Sekasortoa". Well... It could have been worse. In the chorus of "Ei enää koskaan" the others suddenly stopped shouting and only my sturdy rant could be heard. Shit. I still hear about it... From Jakke, who else. The vocals for a couple of the songs were done on Sunday.

Night fell over the rainy Satakunta province and we became more and more interested in the trunk of Mike's car. After the studio personnel had made it clear that we didn't have any business going into the studio at night, and checked that we didn't have any alcohol with us, they went off to have some Saturday night fun. Mike stayed with us for a while and wouldn't give us our bottles from the trunk. He just talked about the agreement, which didn't even exist in reality because the studio owner didn't know about our bottles. We had a long and sweaty coaxing session which almost turned into bullying, and after that we convinced Mike that we wouldn't do anything stupid while drinking. Poison boy took off and the party started. First we were behaving nicely in the kitchen box, but then we got the urge to play again. We were pretty fucked up and I can't recall what kind of extension cords we were pulling from the control room cases.

What a party... I woke up behind the piano the next morning as the personnel came in. They were surprised how clean everything was, although there were several empty Sorbus and Ruska bottles gathered neatly in the middle of the floor. We didn't discuss any of that.

On Sunday we sang the remaining songs and mixed. We were pleased with the sound and generally enthusiastic about the whole thing. We took photos. We barely catched the last train from Pori to Tampere. Then we had to wait for the release until the next March. A flyer was supposed to come with the EP, but they got printed a couple of months after the release. I had several of these flyers, but after many years of moving from one place to another, they've disappeared. A couple of months ago I got one from my good mental specialist friend T. Soininen, the terror of Sarpatti, the foreman of Nokia. THANKS!

After Wilenius had received the master, this record mogul started demanding that we should enter the studio again to make nine more songs. so we could have an LP. We argued about it for a month or so. I remember being on the phone with this rip-off guru, and he was babbling about the effects of the rotational speeds on the overall sound. So that conversation went nowhere. But... Finally we succeeded and got it on blue vinyl.

I've also seen a black vinyl version which is really rare. The current price on "Totaalinen Kaaos" amuses me, because I've had it in my collection since it was released and it's hard to imagine paying hundreds of marks for it. Fuck, to me twenty marks is a lot. Well, the record business keeps on rolling and money circulates and that's how it is.

So that's the story. Let's see what the geezers can come up with for the next issue. Maybe nothing.